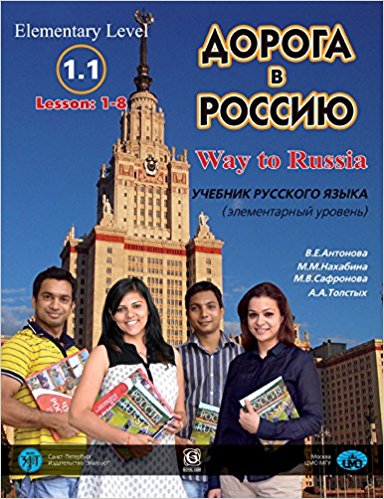 This book has been used to teach Russian in a number of Indian Universities for several years. At the seminar, ‘Creating Teaching Material for Russian Language, Literature and Area Studies in India’ in November 2011, over sixty leading specialists in Russian philology from ten Indian cities recommended that the texbook be adapted for Indian students. The joint effort of many people put together this past year has culminated in this Indian publication.

The textbook, ‘Way to Russia (Elementary Level ) is authored by eminent scholars from the Moscow state University. It is the first part of a series of textbooks which correspond to the Russian Federation’s state standards for the teaching of Russian as a foreign language. The Indian version of this textbook is divided into two parts, containing fifteen chapters in total. It is also accompanied by an audio supplement. Every lesson is followed by a glossary of words included in the chapter with their meanings in English.